I have a thought, an inspiring idea, and I need other people to read it. If I can articulate the notion in 140 characters or less, then my medium will be Twitter.

The original purpose of Twitter—a microblogging cacaphony of 340 million daily updates with more than 500 million registered users as of 2012—was to allow an SMS (or Short Message Service) user to communicate with a small group. With over a half billion registered accounts across the globe, this brings new meaning to the term “small world,” I suppose.

When I first joined, back in 2008, I didn’t initially follow anybody. I felt like a person alone in a silent room, but then I began to invite people in. And suddenly the room became interesting. Friends began to join and the aspect of conversation entered the mix. Up to that point, I had been tweeting celebrities, but it felt like I was talking to myself.

Now, in 2013, the limits of this heightened online mode of communication seem endless. I now give you seven ways to capitalize on Twitter.

This was a life-changing tweet. The instant nature of Twitter allowed me to respond to the job inquiry within minutes of its posting. And, luckily, my website has a short URL (but then again any URL is short with abbreviating alias websites like Bit.ly). Read more about this fateful Internet exchange at Occupy Peace of Mind.

@mjvantine is this in response to my email? You want to play after golf? I didn’t want to play until the mid afternoon anyway. #BeerDie

In the article Beer Die across the nation, we see this phenomenon unfold. I tweeted in conversation with a friend and @juaners80 chimed in.

Juan Rodriquez hailed from Corpus Christi, Texas; without Twitter, we never would have met or exchanged our ideas on the drinking sport known as Beer Die.

3. Conducted and instantly transcribed an interview

Along the vein of this mysterious drinking sport known only as Beer Die, I conducted an interview remotely with the 2009 champion of Brownie’s Beer Die Open.

The whole thing took about 15 minutes.

.@blinetransport Might I suggest the Brookline Police follow you? They can’t keep up with your parking policies. delodell.com/2013/01/09/bro…

5. The @TownOfBrookline kept me on top of the Great Blizzard of ’13

6. Became a comedian for an hour or so

Morning TV is my new favorite thing.Here’s me in San Diego. youtube.com/watch?v=64l9Mx…

This gem inspired me to write Almost Funny, a crash course in comedy that flashed in the pan, but was fun while it lasted.

When Conan O’Brien completed his “The Legally Prohibited from Being Funny on Television” tour in mid-2010, he had time for reflection. 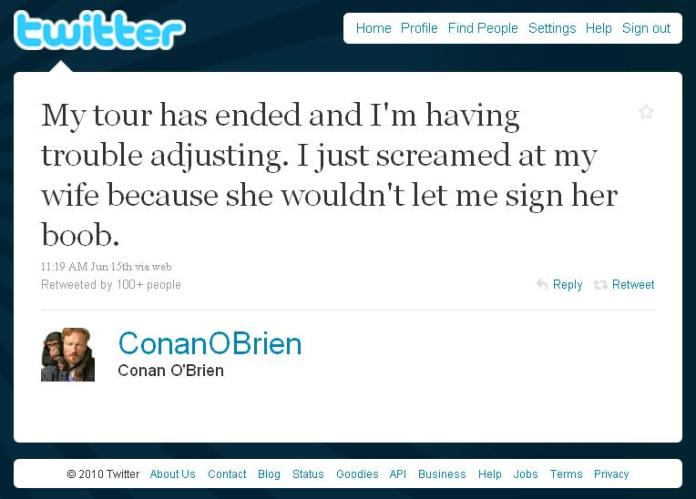 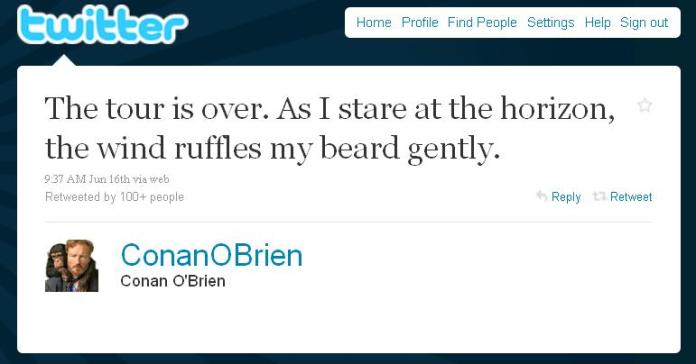 As the lanky, late-night locutor looked inward, I decided to capitalize on this rare opportunity. From his two tweets, I drafted the Top 10 Things I’d Ask Conan O’Brien en rout to TBS.